An Introduction to ARM NEON

NEON is ARM’s take on a single instruction multiple data (SIMD) engine. As it becomes increasingly ubiquitous in even low-cost mobile devices, it is more worthwhile than ever for developers to take advantage of it where they can. NEON can be used to dramatically speed up certain mathematical operations and is particularly useful in DSP and image processing tasks.

In this post I will show how it can improve a simple image processing algorithm and will compare it to several other approaches. My particular implementation will be written for Windows Phone 8, however the principles should be platform agnostic and therefore easily applicable to Android and iOS as well.

We will use NEON to speed up an exciting image processing task: applying sepia tone to a photograph. The basic algorithm given in this blog post will serve as a starting point. Output RGB values are a simple linear combination of input RGB values, with red and green given higher weights than blue in order to give the image a yellowish hue:

The app skeleton is as equally simple, consisting of an image view, image chooser, and several buttons for applying our various implementations of the sepia tone algorithm. I’ve also included some timing code that allows us to very roughly compare the performance of each approach.

Our first implementation in C# is as straightforward as one might expect:

The only thing that might be immediately non-obvious is how we must saturate the output results. As we’re working with 32-bit integers and the color weights total to more than 1, it’s possible for the output values to be greater than 255. We therefore cap (saturate) them to 255. 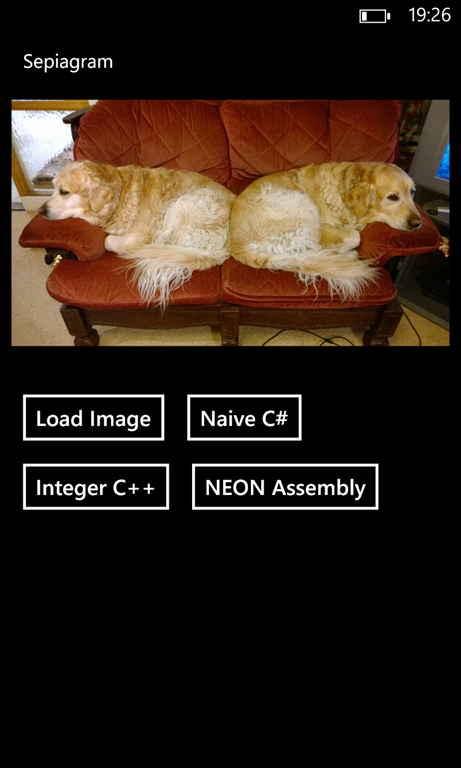 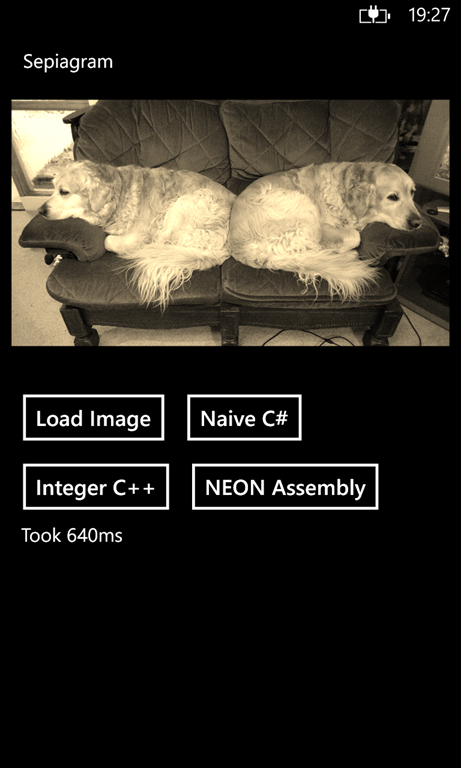 It turns out that floating point operations are slow1 and an immediate improvement can be made by modifying the algorithm slightly to process integers instead of floats. We can scale up each color weight by some factor, apply the transformations, then scale the results back down. As our RGB values are integers between 0 and 255 anyway, this completely eliminates any need for floating point arithmetic. We will choose 1024 as our scale factor as the color weights are given to 3 decimal places (so we lose no precision) and it is a convenient power-of-2. Hence, we can rewrite the equations as:

Despite the fact we have 3 more divisions per pixel in this version than the original, this implementation takes around 300-400ms on the same image – already a 2x speed increase.

To briefly recap: NEON is a single instruction multiple data (SIMD) architecture meaning it can perform the same arithmetic operation on multiple data values in parallel. It has 32x 64-bit registers, named d0-d31 (which can also be viewed as 16x 128-bit registers, q0-q15)2. These registers are considered as vectors of elements of the same data type. NEON arithmetic instructions typically distinguish between these data types in order to apply the same operation to all lanes. For example, vadd.f32 considers a 64-bit register as 2x 32-bit floats, whereas vadd.i8 considers it as 8x 8-bit signed integers. For a more substantive description, please see the official ARM documentation.

Back to our sepia color transformation equations.

We will walk through one iteration of a loop that processes multiple pixels at a time. We have a 32-byte chunk of memory containing 8x 32-bit pixels. These pixels are further subdivided into 4x 8-bit subpixels – alpha, red, green and blue (ARGB). Each block in the figure below represents 1 byte:

NEON allows us to load 32 bytes using a single opcode:

This has the effect of loading 2 pixels into each of the registers d20-d23. Register r0 is a pointer to the 8-pixel block of memory within the bitmap. Now we have:

It should be immediately obvious that we cannot simply multiply in-place by our weights as each subpixel’s value will probably overflow past 255. Therefore we must extend each subpixel to 16 bits:

Note the .u8 suffix on these instructions tell NEON to treat the input registers (d20-d23 in this case) as vectors of 8-bit values (i.e. the subpixels). This is an important distinction as our output would be structured differently if, for example, we used the similar vmovl.u16 instruction3. Now the two pixels contained in 64-bit-wide d20 are extended and copied to the 128-bit-wide q0, and similarly for d21-d23 and q1-q3. Lets now consider only the first pixel, which is contained in register d0:

Again, 2 bytes per subpixel is not enough to guarantee we won’t overflow: considering that we are multiplying each subpixel (max 2^8) by its combined weights (> 1) and also by 1024 (2^10), we need at least 18 bits to represent the intermediate values before we again divide by 1024. Luckily, NEON provides vector multiply and multiply-accumulate instructions that automatically widen their outputs. We therefore perform our three vector arithmetic operations, starting with a multiply:

Here q4 is the destination register, d16 contains our red color weights and d0 contains the pixel we are currently operating on. Note that this form of the vmul instruction takes a 16-bit scalar as its 3rd argument and hence we select the red subpixel by subscripting d0. Next, we multiply by the green weights, contained in d17, and accumulate into the destination register:

And then similarly for the blue weights, contained in d18:

After repeating for the other 7 pixels (using a unique q register for each, we have 16 after all!), we then perform a right shift by 10 to divide by 1024, narrow and saturate:

Here d0 is the destination register, q4 still contains our first pixel, and 10 is a constant. This is the saturating form of the shift-right instruction meaning it will cap output values to 2^16 - 1 if they would otherwise overflow their smaller destinations. After repeating another 7 times, we perform the final saturating narrow to fit our pixels back into 4-bytes:

Finally, we set the alpha value to 255 using a bitwise OR and write the results back out to the bitmap:

The rest of the assembly routine is mainly concerned with setting up the registers containing the color weights, and looping. A link to the full source code of the app can be found at the end of this post.

To summarize, the results on my Lumia 1020 for each implementation are as follows:

Why not NEON intrinsics?

NEON intrinsics are C/C++ macros that compile down to single NEON instructions, at least in theory. In practice I have found that modern compilers still produce downright awful NEON code. My first implementation of the sepia algorithm using NEON intrinsics in C++ performed worse than the naive C# implementation. Looking at the generated assembly, the compiler seems to love pointlessly4 spilling registers into RAM which drastically reduces performance. Thinking that the compiler simply wasn’t intelligent enough to unroll each loop, I manually unrolled them, keeping the theoretical effect of the code exactly the same. The algorithm then did run much faster, but also completely incorrectly, producing vertical blue lines in the output. I didn’t have the time or will to work out why, but either it’s a bug in the Visual C++ compiler or I’m breaking some rules somewhere that I don’t yet know about.